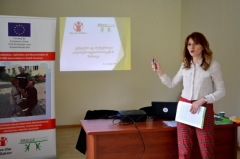 On June 2018 Bridge Innovation and Development in three municipalities of Georgia (Tianeti, DusheTi and Telavi) accomplished the series of trainings “Gender in Disaster Risk Reduction“. The event was organized in terms of the project “Institutionalization, replication and dissemination of ECHO DRR interventions in South Caucasus” funded by the European Commission’s Civil Protection and Humanitarian Aid Department (ECHO)”.

Training was attended by local government and community representatives

Participants discussed the issues related to the various stereotypes still existed in Georgia such as for example split of roles for men and women, less representation of women on decision making positions at the local government and community level that create obstacles for recognition of women role in decision making during disaster risk management process.
BRIDGE gender expert presented to the participant’s research document conducted by Bridge Innovation and Development in 2017 “Gender in Disaster Risk Reduction” that showed in some villages men engagement in the prevention activities and awareness raising campaign seems also a challenge. In such cases men mainly depend on their physical strength and attributes established traditionally in masculine society – such as power and discernment. These approaches interfere men involvement in community resilience activities.

Research also revealed in Georgia that girls and boys for the targeted regions have basic knowledge about their roles in different emergency situations.
In Georgia disaster risk is an ongoing issue due to the country’s geographic characteristics and proneness to such natural hazards as floods, flash floods, landslides, mudflows, avalanches, earth quakes, hail droughts as well as a high level of community exposure and vulnerability. Disasters are not gender neutral. They affect women, men, boys and girls in a different way, with a diverse spectrum of needs, vulnerabilities, challenges and potential.