“Food Security Bill” Registered at the Parliament as a Legislative Initiative 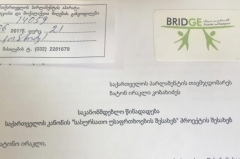 On 30 June 2017, under the name of the Georgian Agricultural and Rural Development Alliance (GAARD), the “Food Security Bill” was registered at the parliament as a legislative initiative. The purpose of the “Food Security Bill” is to create legal regulations in the country, which will reduce the risks of physical needs of the population and their economic access, as well as reduce the dependence on food imports and increase self-sustainability.

The Bill was prepared within the EU funded project "Improving Regional Food Security in the South Caucasus through National Strategies and Smallholder Production”, which Oxfam is implementing in Georgia and Armenia. The above-mentioned Bill has gone a long way. Several public consultations were held, after which the draft law was discussed by all interested parties, including the GAARD member organizations, the relevant agencies of the Ministry of Agriculture of Georgia, the Georgian Academy of Sciences and the Delegation of the European Union