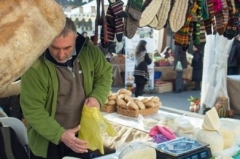 On March 18, 2015 from 10:00 till 14:00 at the Courtyard Marriot Hotel, Oxfam will present the findings of two researches on food security in Georgia and the South Caucasus. The studies were commissioned within the framework of the EC – funded project “Improving Regional Food Security through National Strategies and Small Holder Production in the South Caucasus”.

Two separate studies, The Baseline Research for Food Security in the South Caucasus and The Diagnostic Review of Food Security Policies in Georgia were    commissioned by Oxfam in early 2014,  and represent the first ever attempt in the region to analyze various aspects of agricultural, social and economic policies around food security.

The studies propose comprehensive policy recommendations with the overarching aim to ensure that socio-economic conditions are improved in Georgia and in the South Caucasus through fostering local production for the population to have stable access to safe and nutritious food.

The meeting will be attended by government officials, representatives of international and local civil society organizations along with research and think-tank organizations to provide a common platform for debates on the government’s further engagement around food security issues.

The Baseline Research for Food Security in the South Caucasus maps out the contextual food security conditions in the region in terms of food availability, access, utilization and stability. Some of the main findings highlight the macroeconomic issues such as increased import dependency, high share of food expenditures from disposable income, surprisingly high obesity and overweight rates among the Georgian population and also, increased malnutrition among children. The study will be presented by the lead author, Dr. George Welton.

The Diagnostic Review of Food Security Policies in Georgia highlights the role of the government in addressing food security and nutrition as well as the gaps in in policymaking in Georgia. The main findings and concrete recommendations will be presented by the lead author and key economic expert, Dr. Mikheil Jibuti.

Food Security is a very important aspect of agricultural policy making and constitutes a set of coherent social and economic policies that ensure that the population has stable access to safe and nutritious food for a healthy and active lifestyle.